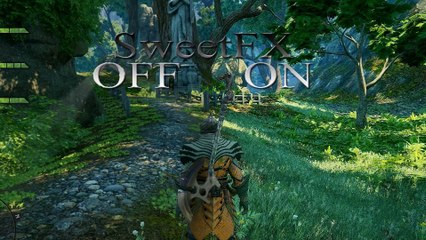 Dragon Age Inquisition - is now visually enhanced with SweetFX preset. SweetFX works on Windows 7 / 8 / 8.1 - for both Nvidia and Amd cards!!!

You need to use Radeonpro with the presets. Guide for you is in the link below -

Preset from the video in the link: https://www.sendspace.com/file/hk5fqk

So in case you're new to SweetFX Shader Suite (or just SweetFX), it's a mod built on the InjectSMAA shader injector, that allows you to apply a suite of post processing shader effects to your games.

You can add SMAA anti-aliasing , sharpening and tweak the color, gamma , exposure and more.

It's meant to allow you to improve the look of your games and change the look and mood of it to your liking.

It works with all graphics cards as long as they support at least shader model 3. That's all cards produced after 2002 (give or take).

It does not work with 64bit game executables yet, however 64bit support should be coming in the near future - so far use the 32bit version of your game if it gives you a choice between 32 and 64bit.

It may work on Linux using Wine - please report your findings.

It does not work well with most programs that overlay an image onto the game. It has a workaround for the Steam overlay so that will work, and you can make overlays based on Rivatuner OSD work as well with a compability setting in those overlays , but other overlays may prevent SweetFX from making changes to the image or outright crash the game - turn those off.

SweetFX is a universal image improvement and tweaking mod,

that works with almost any 32bit (and hopefully soon 64bit) DirectX 9, 10 or 11 game or application.

It's goal is provide similar tools to games in realtime, as video processing software provides for movies and videos.

* FXAA Anti-aliasing : Anti-aliases the image using the FXAA technique - currently only work under DirectX9. Use the d3d9.dll found in \SweetFX\dlls\FXAA DX9 dll\ for this.

* Explosion : Scatters the pixels similarly to the Explosion filter in Irfanview

* Bloom : Makes strong lights bleed their light into their surroundings

* Levels : Sets a new black and white point. A fast and easy way to increase contrast but it causes clipping. The Curves effect does this in a more subtle way without causing clipping.

* Technicolor : Makes the image look like it was processed using a three-strip Technicolor process - see http://en.wikipedia.org/wiki/Technicolor

* Cineon DPX : Makes the image look like it was converted from film to Cineon DPX. Can be used to create a sunny look.

* Monochrome : Removes colors from the image so it appears as if shot on black and white film.

* Lift Gamma Gain : Adjust brightness and color of shadows, midtones and highlights (and typically does it better then the Tonemap effect)

* Vibrance : Intelligently saturates (or desaturates if you use negative values) the pixels depending on their original saturation.